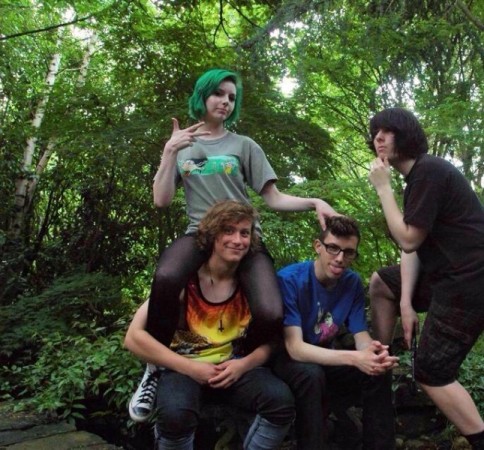 Bright-eyed and angry teenagers don’t exactly run the local music scene. Yet, Ted Bunny has been welcomed into music venues like El Corazon and Ground Zero after only 3 months of playing together. The band is made up of Mitchell Bowen (16, left) on the drums, Bella Brockman (14, top) on the guitar, Kellen Reeder (18, center) on the bass and Avery Davis (15, right) on vocals and lyricism.

“Our first rehearsal was 6 hours long,” said Davis of the band’s dedication.

They have composed 10 songs and are working on releasing an album. The band plays to a “hardcore punk pace” with figurative and often sarcastic lyrics. The band aims to be controversial, but also empathetic towards teenagers who have a reason to be angry. Their demo songs, recorded in Bowen’s basement can be heard on sound cloud, here: soundcloud.com/tedbunnyband

The band’s biggest source of tension so far has been the strong investment each member has in song composition. On the flip side, Reeder and Davis spoke most fondly of the band’s musical passion. Practices are easy to schedule because they are a priority for each member.

For Davis, the highlight of being in Ted Bunny is “the joy of playing music with my new best friends.”

“We all love the music that we’re playing,” said Reeder.

According to him, because the band is in an excellent “music community”, their hope for the future is bright. Releasing an album, booking more shows and eventually going on tour with a record label are on the horizon. They are grateful, dedicated and optimistic.

Ted Bunny’s first show is scheduled for August 20th at the hardcore music venue, El Corazon. They will be playing in the lounge, and the doors open at 7pm. It will be Reeder and Bowen’s first time playing a show. The band is ripe with anticipation.